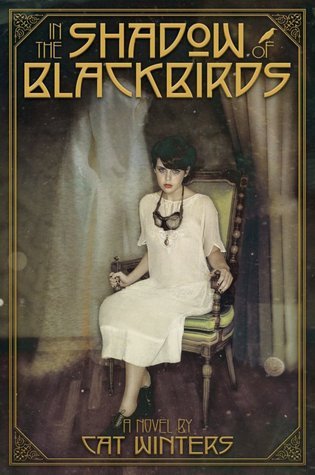 In the Shadow of Blackbirds

“I think between the war and the flu, no one’s going to escape getting haunted. We live in a world so horrifying, it frightens even the dead.”

Not only is this book perfectly suited to someone who enjoys a paranormal mystery with a more heavy tone, but it also packs a historical punch. The atmosphere is spooky, the air is heavy with pestilence and spirits, and the reader may also note that the war taking place over seas is not all that is killing people by the masses.

The book takes place in early twentieth century America, when WWI is in full swing, and the Spanish Influenza is claiming the lives of those left back home waiting for their soldiers to return. Surrounded by death and uncertainty, the country is also experiencing an era of Spiritualism, brought on by those who are desperate for closure in any way they can get it, and those who claim to have the ability to provide it. The plot is intensely dark and foreboding, but not just due to the possibility of paranormal activity. What makes this book so utterly dark is the historical nature of what is taking place, what is actually born of fact that draws the reader in with an interest they may not have had in history class.

Remember history classes in school? The format of the history books we use was brought to mind when I finished this novel and was pondering over its contents. I was thinking about the way events during certain time periods are usually separated into their own neat paragraphs, headings bold with titles like, “The Start of World War One”, and then a page or two later, “The Spanish Influenza.” (I’m getting to the point, I swear 😅) The separation of those events in word format can sometimes cause the brain (ok, maybe just my brain) to make a small disconnect and look at them as things that happened independent of one another, neither one affecting the other, even when the book states they took place at the same time.

I’ve brought all that up ^ to say what I appreciated most about this story is that the reader is given a perspective that sometimes gets overlooked in history books, especially the perspective of an event that took place during a war, as the war is typically what lessons focus on. We are taught to memorize the facts for learning purposes, but that can sometimes drown out the empathetic aspects that we as humans can glean from looking into what else is going on. What this novel did for me was shift my focus to something that I learned about as a FACT and made me really start to see just how dire life was for civilians as well, from a perspective other than how they were affected by the war. Readers will also be acquainted with twentieth century knowledge of what they called “shell shock” and what we now call “PTSD.”

If you’ve made it this far in my review, let me just say this: The book is still an enjoyable work of fiction, and is NOT as depressing as I may have made it sound, and I am sorry if I’ve scared you off of it. These are just “my thoughts” and interpretations, and where my brain took off to after reading. It’s a really well done historical fiction with a paranormal mystery element, and I do hope you give it a read if those are genres you enjoy.

Thank you for reading! I’d love to hear your thoughts on the book if you’ve read it, or if you are planning to read it in the future!